It is difficult to provide a monthly market report, in this case for August, with all the economic and destabilizing changes that are impacting the Toronto and area housing market. The salient data is clear, as the chart below indicates. 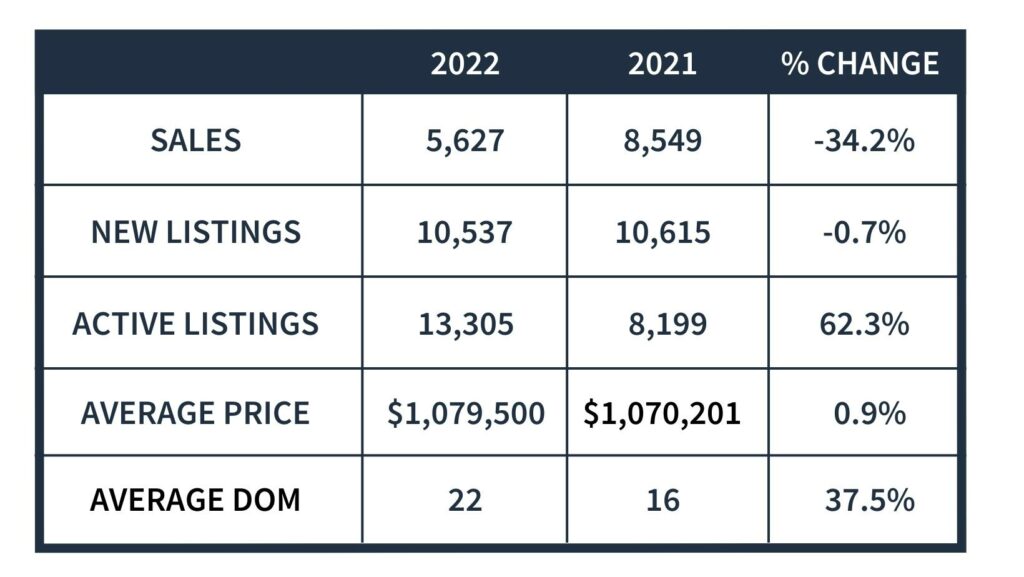 The residential resale housing market has changed dramatically since last year. Sales are down, the number of active, available properties for sale has increased, properties are taking longer to sell, and although the average sale price appears to be holding up quite well compared to August 2021, it is off by almost 20 percent compared to the $1,334,000 achieved in February of this year. February and March were the zenith of the Covid-19 pandemic market – cheap money, lack of supply, the need for space and real and psychological security, not to mention the prevailing belief that if you did not acquire and own real estate, the accumulation of wealth would be impossible, were the driving forces. 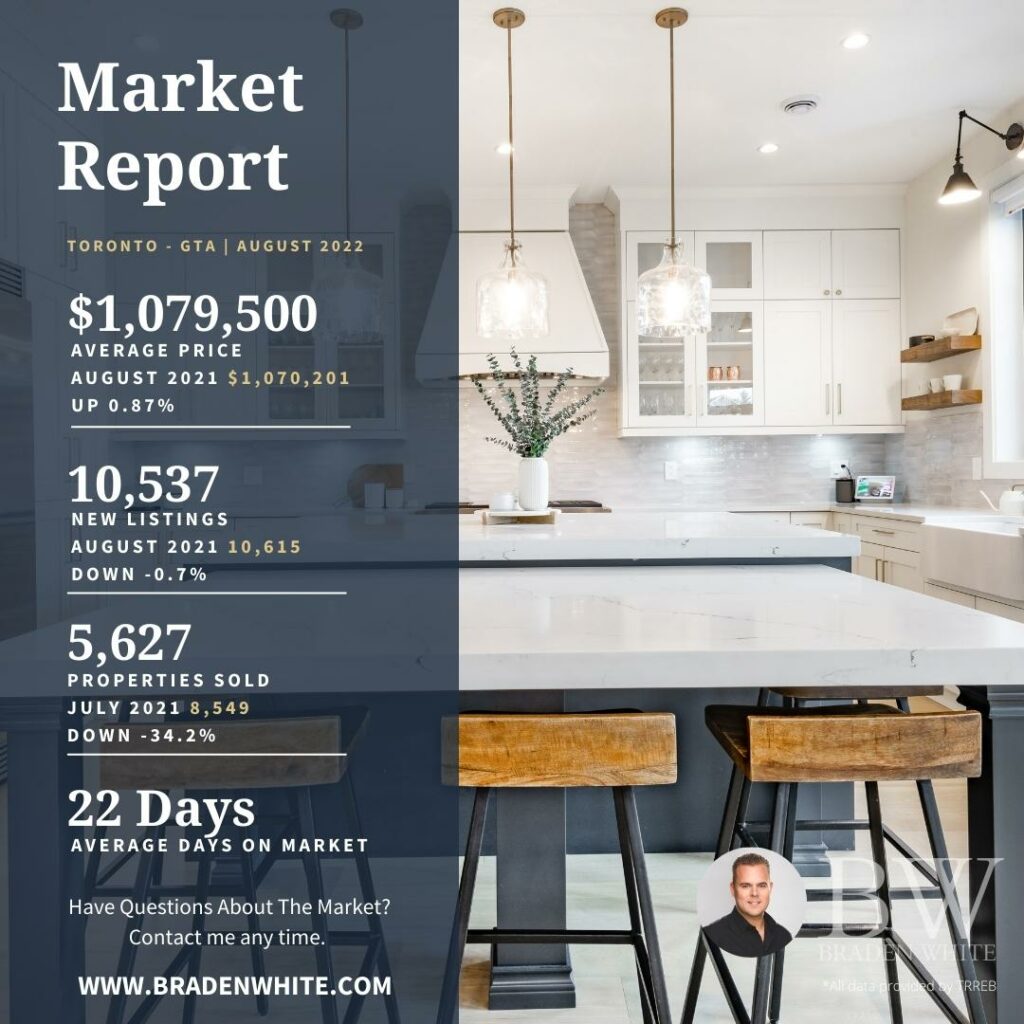 The major change that has had an overwhelming impact on the Toronto and area housing resale market has been the sky-rocketing cost of borrowing money. All the market changes set out above – decline in sales, increase in available properties, sale times, and declining average sale prices can be directly linked to the Bank of Canada’s continual increase of its benchmark rate. In March, the Bank’s policy interest rate was 0.25 percent. At the end of August, it was 2.50 percent.

If there was no further threat of further Bank rate increases, by the end of August, it could be said, with some certainty, that the resale market had stabilized – sales, prices, and the length of time it took properties to sell. Unfortunately, on September 7th the Bank increased its policy rate by a further 0.75 percent, bringing it to 3.25 percent. The last time the Bank rate was 3.25 percent was April 2008. Early September data indicates that the most recent increase has had a further cooling effect on the residential resale market. The pace of sales is slower than it was in August. At the time this Report was prepared the pace of sales in September was 25 percent slower than at the same time in August, a number that correlates with the percentage increase in the September policy interest rate by the Bank of Canada.

The sharp increases in the policy rate by the Bank of Canada continue to destabilize the residential resale market, not to mention the residential rental market (beyond the scope of this Report) that has seen rents increase by as much as 25 percent in a single year. The decline in average sale prices has not made Toronto’s residential resale market more affordable. Whereas the average sale price may have declined by 20 percent since February, mortgage interest rates on average have increased by more than 150 percent over the same period. Coupled with the impact of the mortgage interest stress test, buying a house in the Toronto and area marketplace has become exponentially more expensive, even as compared to February and March when average sale prices peaked at $1,334,000. Regretfully in its latest policy statement, the Bank of Canada made it clear that it was prepared to implement further increases in order to contain inflation which currently is 7.6 percent, down from 8.1 percent in June – of advanced economies only Japan (2 percent) and Switzerland (3.5 percent) have inflation rates anywhere near the magical 2 percent that the Bank of Canada is determined to achieve.

The good news, not only for the housing market but for the economy generally, is that inflation appears to have peaked, with some indication that it is declining in various sectors. If this is a continuing trend, the Bank may stall further increases. That would be the signal that will cause the housing market to reignite. Buyer sentiment will change – there will be a new understanding that prices and sales will not decline further. Unless some unforeseen economic event occurs that should happen before the end of this year.