In the face of daunting obstacles, the Toronto and area residential resale market produced stellar results, albeit not the stratospheric results achieved during the same period last year. In the face of rising interest rates, the war in Ukraine and its global consequences, government legislation primarily directed against foreign buyers and investors, and a desperate lack of inventory, the Toronto and area market produced the third-best March and the second-best first quarter on record.

Any comparison with March 2021 is almost pointless. During the first quarter of 2021, the resale market was being driven by the frenzy of the pandemic, causing indiscriminate buying, particularly in suburban and secondary markets. Even without all the obstacles, the market is currently experiencing that level of activity was unsustainable.

Given rising mortgage interest rates, it is not surprising that average sale prices have plateaued. The trend of constantly rising average sale prices is at an end and will stay steady until the current cycle of rising interest rates is at an end. Rising rates have the immediate effect of removing fringe buyers (often first-time buyers) from the market and lowering the price-point expectations of others.

If there was any doubt about the strength of the Toronto and area marketplace, two statistics dramatically prove the opposite. In March, all properties that hit the market (on average) sold in only 8 (unbelievable!) days. To emphasize this point, all 10,955 properties that sold in March were listed, marketed, negotiated, and sold in only 8 days. Even last year during Toronto’s strongest market in history, it took 10 days for all properties to be sold.

Despite the obstacles faced by the Toronto and area market, the growth in average sale prices was stronger in the 905 region as compared to growth in the City of Toronto. This continues the pattern that started during the pandemic, where less expensive homes offering more space were available. 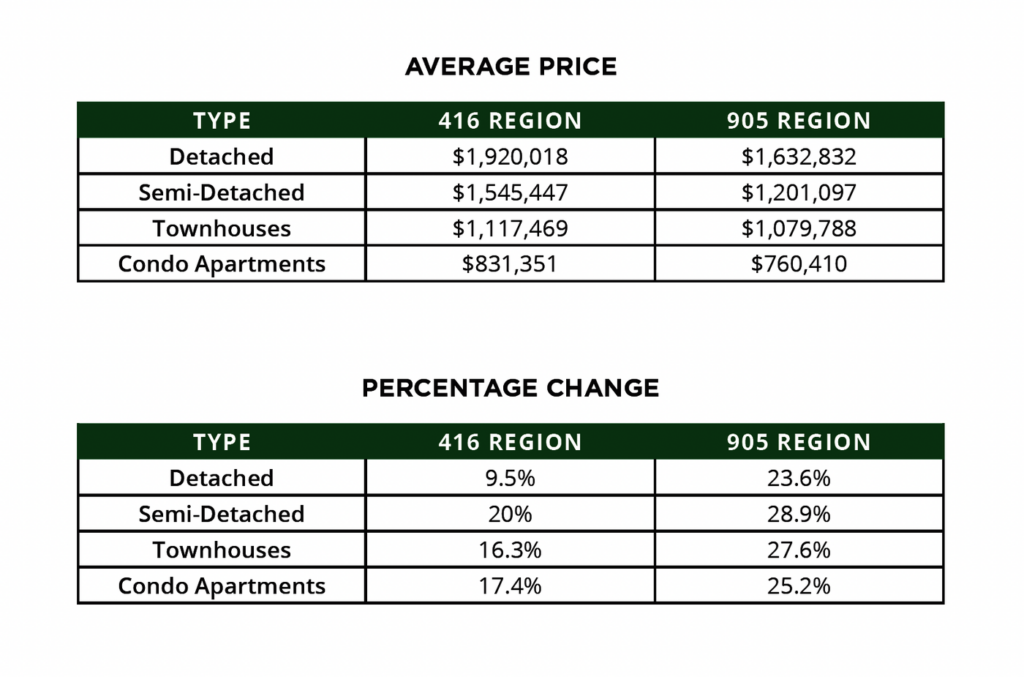 Overall prices in the City of Toronto increased by 15.8 percent and by almost 27 percent in the 905 region.

As the market moves into April, supply shortages continue to be a problem. In March a little over 20,000 new properties came to market, almost 12 percent fewer than the 22,747 that came to market last year. As we enter April, buyers’ choice remains limited. At month end there were 10,167 available properties for sale, down over 4 percent compared to the 10,603 available last year. Based on the pace of sales, there were only 0.9 months of inventory in the entire greater Toronto area. The supply was marginally better in the City of Toronto, primarily because of the availability of condominium apartments, coming in at 1.1 months of inventory. Given the population of the greater Toronto area (approximately 6.7 million) a healthy, balanced market requires at least 20,000 properties monthly on a continuous basis available to buyers.