There were a few surprises and once again a number of new records established by the Toronto and area residential resale market in January.

First, and very noteworthy, was the average sale price for all properties reported sold. It came in at an eye-popping $1,242,793, surpassing the previous record of $1,163,210 achieved in November of last year. By contrast, last January the average sale price came in at only $966,068, a year-over-year increase of almost 30 percent. This is not supposed to happen in January, historically a quiet month, and it happened during a snow filled month making access to properties extremely difficult.

As has been the case throughout the pandemic, the increase in the Toronto and area average sale price was 905 driven. As the chart below indicates, year-over-year price increases in Toronto’s 905 region averaged almost 34 percent and only 24 percent in the City of Toronto. 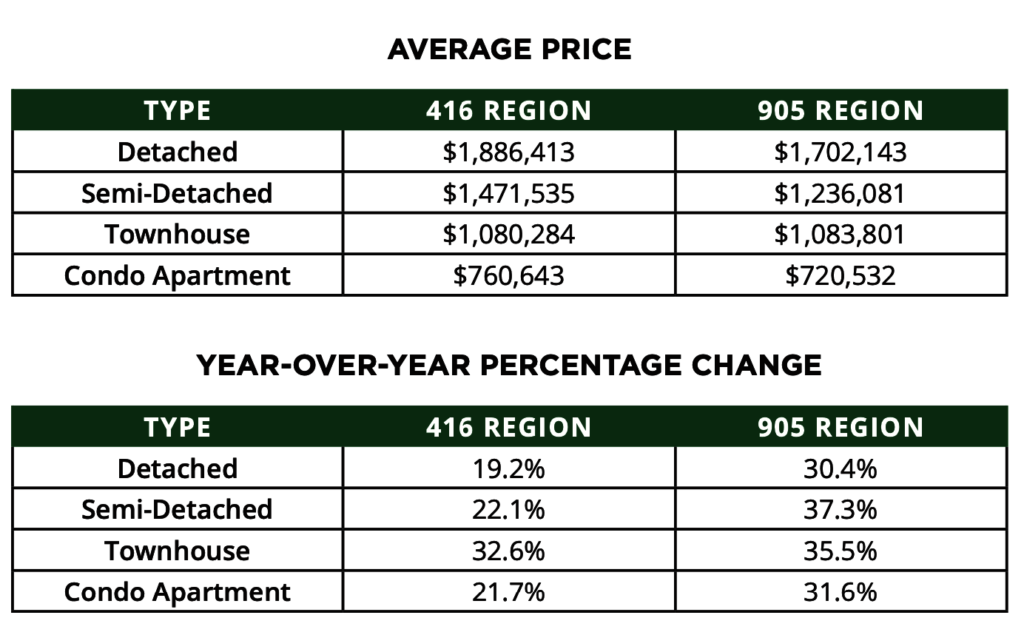 As a result of these increases, the 905 has dramatically reduced the gap in housing prices between the City of Toronto and the 905 region. With more people working from home and needing more interior and outdoor space, this pattern will continue throughout the foreseeable future.

A trend that began in the second half of 2020 has now become common place, namely the disparity between list and sale prices. Throughout the entire Toronto and area marketplace all properties sold for 113 percent of their asking price, including 2016 condominium apartments. The most startling disparity was the reported sale of semi-detached properties in Toronto’s eastern districts. All semi-detached properties throughout the eastern districts sold for 127 percent of their asking price, and astoundingly in the neighbourhoods of Riverdale and Leslieville the sales to list ratio was 134 percent, another market record, and a buyer’s nightmare. This discrepancy will only get worse. At the beginning of February there were only 26 active semi-detached property listings for the entire eastern trading area. 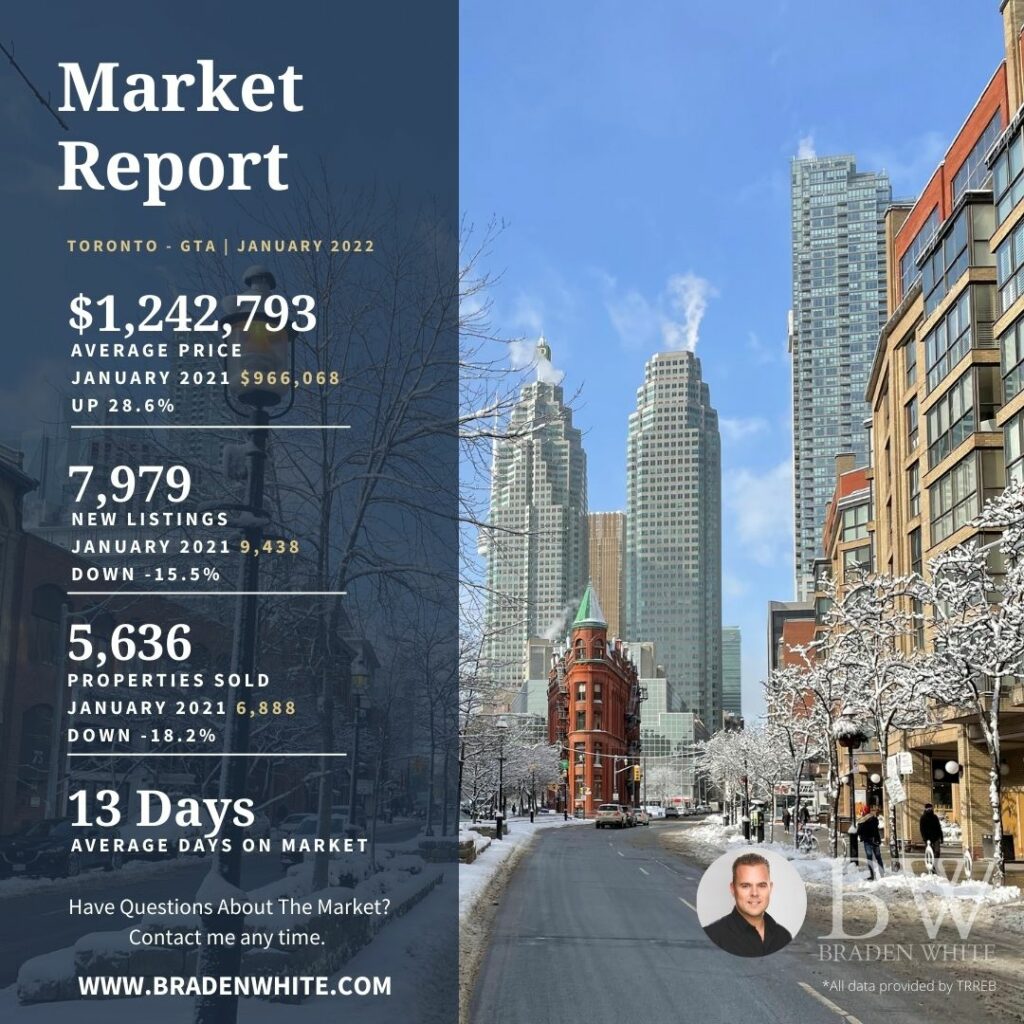 The luxury market has also undergone a major transformation over the past few years. In January, 590 properties were reported sold with a sale price of $2 Million or more. This compares with only 331 in January 2021, 130 in 2020, and a mere 76 in 2019 – a 676 percent increase in three years. This is also, no doubt, a record. Clearly the definition of “luxury” will have to be redefined.

Supply generally will be the driving – rather inhibiting – market force in 2022. Supply was at an all-time low at the end of 2021, with no improvement in January. January saw 7,979 properties come to market, a decrease of almost 16 percent compared to the 9,438 that came to market last year. As buyers venture into the February market only 4,140 available properties await them, a 44 percent decline compared to the 7,396 (also extremely low) available last year.

With this shocking low level of supply, it is not surprising that reported sales were down in January compared to last year. There were 5,636 sales in January, down over 18 percent compared to the 6,888 property sales last year. Notwithstanding this negative variance, it must be remembered that January’s numbers are very robust compared to what used to happen in January before the pandemic. For example, in January 2020, the month that Covid-19 became part of our vocabulary, only 4,546 sales were reported, and the year before that only 3,968.

Looking ahead all eyes are on the Bank of Canada and when it will raise interest rates. Given the level of demand and the lack of supply the impact of higher mortgage interest rates will likely be moderate. Those buyers struggling to qualify today will be forced out of the market, especially first time buyers, but for every one of them there are still many who are intent and capable (if they can find one) on acquiring a house.